Mr. Ed. Andress was born in 1886 and raised in the 1000 Islands area. As his father and uncle before him, he began building skiffs and outboards at a very young age.

In the 1920’s he moved to Rockport where he began what was to become over the next 40 years a successful boat building operation.

In the beginning by building the smaller boats on speculation during the winter months, he had no trouble in selling them in the spring. This soon turned into specialty boats on demand and special orders.

During the next 3 decades, many of Ed’s own built tour boats plyed the St. Lawrence River, carrying the names of boat lines such as Rockport, Brockville, Ivy Lea and Long Sault.

Ed also needed a boat of his own which he built as a passenger boat carrying up to 20 passenger. This was the first of a long line of “Elva”, named after his daughter Ethel’s middle name. This also created “Elva Boat Tours” which during the summer trips were made to Brockville, Kingston and Alexandria Bay NY with “Captain Ed Andress” at the helm. Border crossing was much more open then and special Saturday evening trips were made to Alexandria Bay for shopping and theatre goers alike returning to Rockport later in the evenning.

The last of the Elvas was commissioned in 1956 and was retired from the water in 2006, although it still sits inside at the marina.

With changes in regulations over the years restricting the number of passengers, these 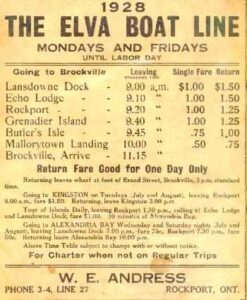 tours eventually evolved into a water taxi service carrying a maximim of 12 passengers. Todays water taxi carries up to 8 passengers.

Following World War 11, Ed’s son Elmer joined the business which for the next 3½ decades was notably known as “W.E. Andress & Son”. Boat building was quite lucrative at that time with many boat shops set up on both sides of the border. The Andress’s employed as many as 3 full time employees and as many as 6 to 8 part time as the summer work also included cottage and dock building and maintenance.

By 1980 as Elmer entered his 70s he wanted to retire and wanted his father to retire with him and the family faced the challenge of finding the appropriate ‘next generation’ to carry on business.

In 1981 “W.E. Andress & Son” became “Andress Boat Works” with the purchase of the business by Ed’s granddaughter and husband, Wendy and Art Merkley, and they partnered with Wendy’s brother, Dick Johnston, another family boat builder who worked with Elmer and Ed, to carry on the tradition of building and maintaining wooden boats. This next evolution had more focus on the Marina aspect of the business and more docks were added.

Today Andress Boat Works is proud to be the marina of choice for many families who kept their boats with Ed and many customers are now into the third and fourth generation of dealing with Andress’s.

Dick Johnston has since retired but he still comes in to help mentor younger folks on caring for the returning wooden boats.

We’ve experienced many milestones over the years, including the retirement of Ethel Johnston’s Andress built St. Lawrence River skiff. The Undine was build in 1903 by Ed’s father for Miss Anne Thaxter Eaton on Tar Island. In later years after the Eaton family sold their place on Tar Island, Miss Eaton would spend her summer vacation at the home of Ed and Edna Andress and row her skiff daily around the river. When Miss Eaton passed away in 1971, Ethel Andress Johnston became the new owner and continued to proudly row the skiff around the river until a few years ago. Now it is retired and is proudly on display in the RiverRock Shoppe at Andress Boat Works for many to enjoy her beauty. A history wall is in the making to capture some of the history of the boats built and maintained by Andress’s over the years.

Wendy can be found cruising  about the river in a 19 ft. day tripper built by W. E. Andress and Son back in 1955 for Mr. Aubrey Hunt. Wendy was fortunate to be able to purchase this boat from Linda Hunt-Nelson and Dick restored it and still helps Wendy keep it in top notch shape.

Art and Wendy invite folks to drop by and see the store and the shop, much of which is still the way it was when Ed and Elmer were building boats, although parts have changed, you can visualize how things might have been 40-50 years ago.